NDA Exam notification is out NDA exam is conducted 2 times every year. The exam is conducted for the recruitment of Candidates for the Officers in Army, Navy & Airforce. The candidates are shortlisted on the basis of written exam followed by SSB Interview.

Here we have mentioned all the official exam date and events related to NDA-I 2022:

The approximate number of vacancies to be filled on the results of this examinationwill be as under:

Only unmarried male/female candidates born not earlier than 02nd July, 2003 and not later than 1st July, 2006 are eligible.

Candidates (excepting SC/ST candidates/Sons of JCOs/NCOs/ORs specifiedin Note 2 below who areexempted from payment of fee) are required to pay afee of Rs. 100/- (Rupees one hundred only)

(i)   For Army Wing of National Defence Academy:—12th Class pass of the10+2 pattern of SchoolEducation or equivalent examination conducted by aState Education Board or a University.

(ii)  For Air Force and Naval Wings of National Defence Academy and for the10+2 Cadet Entry Scheme at the Indian Naval Academy:—12th Class pass ofthe 10+2 pattern of School Education or equivalent with Physics andMathematics conducted by a State Education Board or a University.

Candidates who are appearing in the 12th Class under the 10+2 pattern ofSchool Education or equivalent examination can also apply for thisexamination.

The candidates who qualify the written exam need to go through the SSB Interview at the respective centres of Army, Navy & Airforce. The final Merit list is prepared on the basis of Joint score of Written exam and SSB Interview.

One third of the marks assigned to that question will be deducted as penalty.

The Examination will be held at the following Centres:

SYLLABUS OF THE EXAMINATION

real coefficients. Solution of linear inequations of two variables by graphs. Permutation and Combination. Binomial theorem and its applications. Logarithms and their applications.

Types of matrices, operations on matrices. Determinant of amatrix, basic properties of determinants. Adjoint and inverse of asquare matrix, Applications-Solution of a system of linearequations in two or three unknowns by Cramer’s rule and byMatrix Method.

Concept of a real valued function–domain, range andgraph of a function. Composite functions, one to one, onto andinverse functions. Notion of limit, Standard limits—examples.

The question paper in English will be designed to test thecandidate’s understanding of English and workman like use ofwords. The syllabus covers various aspects like : Grammar andusage, vocabulary, comprehension and cohesion in extended textto test the candidate’s proficiency in English.

– The syllabus given below is designed to indicate the scope of thesesubjects included in this paper. The topics mentioned are not to beregarded as exhaustive and questions on topics of similar naturenot specifically mentioned in the syllabus may also be asked.

Candidate’s answers are expected to show their knowledge andintelligent understanding of the subject.

Natural and Artificial Magnets, Properties of a Magnet,Earth as a Magnet.

General Principles in the working of the following:

Properties of Air and Water.

Difference between the living and non-living. Basis of Life—Cells,Protoplasms and Tissues. Growth and Reproduction in Plants andAnimals.

Elementary knowledge of Human Body and its important organs.

Common Epidemics, their causes and prevention.

A broad survey of Indian History, with emphasis on Culture andCivilisation.

The Earth, its shape and size. Lattitudes and Longitudes,Concept of time. International Date Line. Movements of Earth andtheir effects. Origin of Earth. Rocks and theirclassification; Weathering—Mechanical and Chemical,Earthquakes and Volcanoes. Ocean Currents and TidesAtmosphere and its composition; Temperature and AtmosphericPressure, Planetary Winds, Cyclones and Anti-cyclones; Humidity;Condensation and Precipitation; Types of Climate, Major Naturalregions of the World. Regional Geography of India—Climate,Natural vegetation. Mineral and Power resources; location anddistribution of agricultural and Industrial activities. Important Seaports and main sea, land and air routes of India. Main items ofImports and Exports of India.

Knowledge of Important events that have happened inIndia in the recent years. Current important world events.

The SSB procedure consists of two stage Selection process- stage I and stage II. Only those candidates who clear the stage Iare permitted to appear for stage II. The details are:

(a) Stage I comprises of Officer Intelligence Rating (OIR) tests arePicture Perception * Description Test (PP&DT). The candidateswill be shortlisted based on combination of performance in OIRTest and PP&DT.

(b) Stage II Comprises of Interview, Group Testing Officer Tasks,Psychology Tests and the Conference. These tests are conductedover 4 days. The details of these tests are given on the websitejoinindianarmy.nic.in.

The personality of a candidate is assessed by threedifferent assessors viz. The Interviewing Officer (IO), GroupTesting Officer (GTO) and the Psychologist. There are no separateweightage for each test. The mks are allotted by assessors onlyafter taking into consideration the performance of the candidateholistically in all the test. In addition, marks for Conference arealso allotted based on the initial performance of the Candidate inthe three techniques and decision of the Board. All these haveequal weightage.

The various tests of IO, GTO and Psych are designed tobring out the presence/absence of Officer Like Qualities and theirtrainability in a candidate. Accordingly candidates areRecommended or Not Recommended at the SSB.

NIMBUS DEFENCE ACADEMY is leading ACADEMY of NORTH INDIA which prepares the cadets for all the defence exams. NDA Coaching in Chandigarh program in NIMBUS DEFENCE ACDEMY is meticulously designed and  the cadets are well prepared for the challenges of the NDA Exam. The candidates need to work on the basics of all the subjects and practice more of problems in order to succeed at NDA exams. There are 400 odd seats for which about 5 lac aspirants apply. In the NDA 2021 (II) exam around 8000 candidates have been shortlisted for SSB interview. In order to crack the NDA exam we need a clear plan of action based upon the individual strengths & weaknesses. Same strategy might not work for all the candidates. So the personal mentorship & guidance is of utmost importance in order to crack the NDA exam.

At NIMBUS DEFENCE ACADEMY , the entire team is focussed and work at the individual level to get the best out of the candidate. We guide the students at every step to help them formulate the clear plan of action for their individual success. Under the Guidance of Colonel Arvind Kumar & Colonel Urvinder Singh & Lt. Colonel Manish Kumar , the students are also trained for the SSB Interview. The NDA 2022 Exam notification is out and its time to set our GOALS and start working on it. NIMBUS DEFENCE ACADEMY has launched the program for the aspiring youngsters to have a go at NDA 2022(II) Exam.   The salient features of the Program are as under – 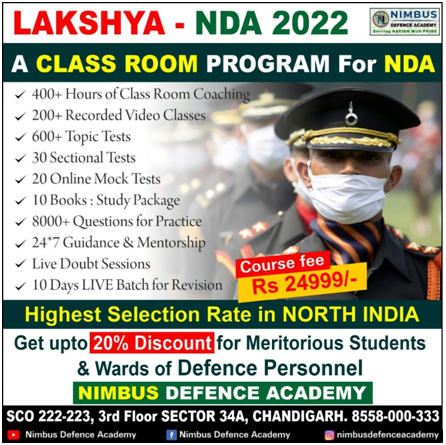